“Besides the aroma advantages, this method
is superior because it produces a more consistent quality than batch production and has lower processing costs.”

“We wanted to make products as fresh, authentic, and close to their original taste, aroma, and nutritional value as possible.”

E-COFFEE FROM MASTERCOLDBREWER HAS DEVELOPED AND PATENTED A NEW MANUFACTURING PROCESS THAT ALLOWS THE PRODUCTION OF COLD BREW COFFEE WITHIN MINUTES – CUTTING COST DOWN BY 80% AND REVEALING THE AROMA OF THE BEAN WITHOUT BITTERNESS.

He did his research and discovered the cold extraction process was the invention of Prof. Tilo Hühn of the Zurich University of Applied Sciences (ZHAW) and Roland Laux, co-founder of food innovation. To Schlittler’s surprise, upon contacting them, he discovered Laux had patented the process for use in coffee under the name Mastercoldbrewer. Schlittler says this new cold brew production method extracts the full aroma of the bean with little to no bitterness.

“It’s taken a very old product and found a new way to extract it,” he says. “A lot of people who drink cold brew remember it as a very bitter drink. Laux’s cold brews, on the other hand, offer very fruity, nice new flavours for consumers to discover.”

“Cold brew is growing in popularity worldwide, with more than 20 per cent market penetration in the United States and it already well established in the Asia-Pacific. And multinationals like JAB Holdings have recently invested in cold brew producing companies of their own.” Mastercoldbrewer uses its Spin Cold Brew method to extract coffee. First, the lightly roasted whole beans are finely ground while submerged in cold water.
“This enlarges the surface, which enables the reactions and the extraction of valuable substances including rich aromas from the natural source,” Laux says.
After milling, a decanter is used to separate the coffee into oil- and water-phases. This forms a cloudy liquid that is filtered to produce a clear, black cold brew.
“By using the coffee-oil, we are able to produce a coffee beverage which contains complex flavours,” Laux says. 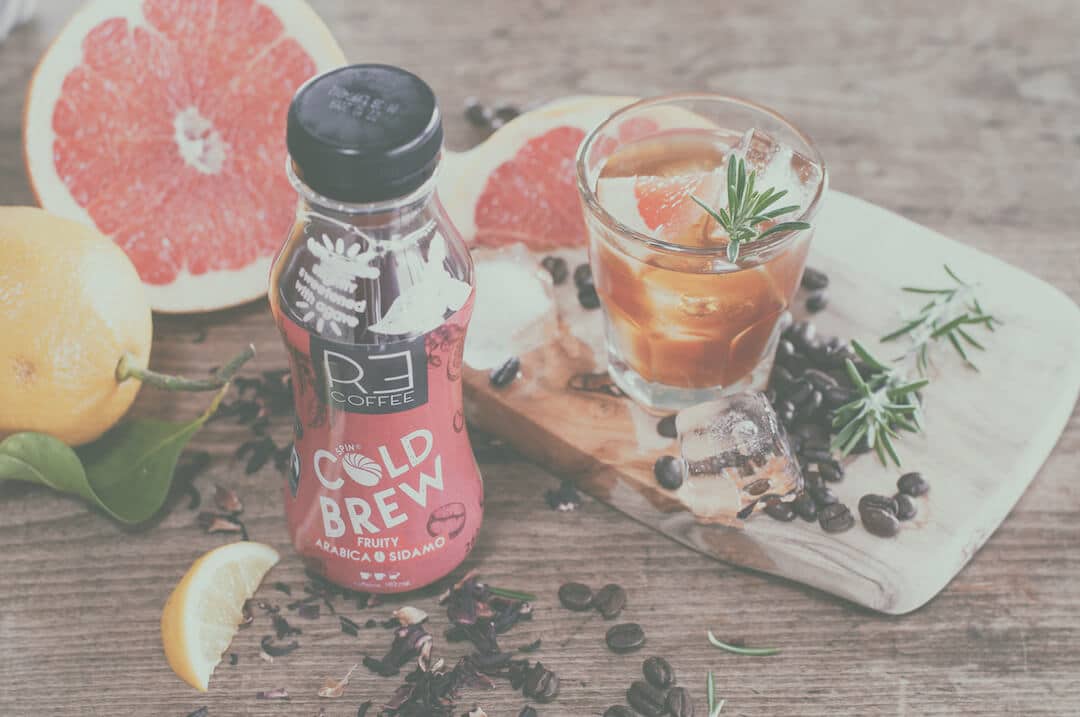 “[Other] cold brew products on the market contain only a small part of the potential richness of the flavour’s captured in the coffee- oil.”

He adds the lack of heat in this extraction also helps the coffee’s flavours to flourish.
“Cold coffee has a long history in Japan, South Korea, and Greece. However, like in hot coffee, the coffee beans are extracted at high temperatures and then cooled down,” Laux says. “In comparison, cold brew sees powdered coffee soak in a tank with cold water for many hours. The absence of that 100°C temperature during the extraction avoids the creation of bitter and acidic substances, while the caffeine and primary aroma components still get extracted.” Spin Cold Brew, however, is more efficient than this traditional batch production and creates a higher quality product.

“Due to the intense grinding and extraction of the coffee bean, as well as the short process time in a closed system, a ready-to-drink beverage is directly produced, without the need of concentration and re-dilution,” Laux says. “Besides the aroma advantages, this method is superior because it produces a more consistent quality than batch production and has lower processing costs.”

Laux says it only takes about one minute from putting the beans and water into the mills for the finished product to come out. “Meanwhile, traditional cold brew takes between eight and 24 hours to extract in large batches. Ours is one continuous process,” he says. While this cold extraction method now applies to coffee, that was not the original intention for the process, and neither was its application to chocolate. 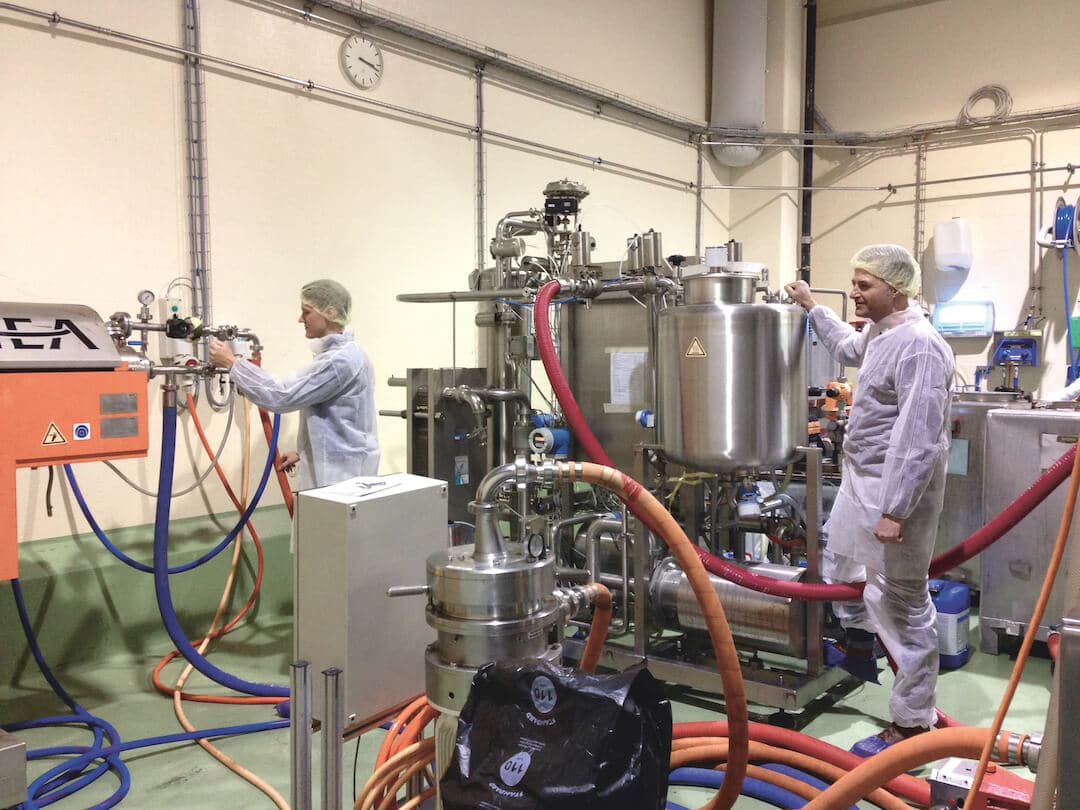 “Besides the aroma advantages, this method
is superior because it produces a more consistent quality than batch production and has lower processing costs.”

ith a background in sales and marketing at Nestlé North and South America, Laux returned to his native country of Switzerland in the early 2000s where he established his food innovation firm Unico-first. He met Hühn while searching for a unique selling proposition for a Swiss apple juice company in 2004.

“We started a great collaboration and created a common vision, which was, ‘how can we extract more of the good from raw materials into a finished food product?’,” Laux says. “We’d observed the difference between the intrinsic and inherent quality of raw materials – fruits, vegetables, even coffee beans – and the finished product. We wanted to make products as fresh, authentic, and close to their original taste, aroma, and nutritional value as possible.

“We are looking to capture the quality related to the raw material – the origin, variety, complexity, vintage, and humans growing and roasting one of the most complex raw materials of the world.” At ZHAW, Hühn had previously used the decanter method to produce wine and olive oil, and with Laux, apple juice. The two began thinking of other ways to apply the technology, finding inspiration while on a trip to Nestlé’s Venezuelan factories. “The rich aromas of the roasted cocoa beans could be smelled throughout the factory. Roland asked, ‘why are all the flavours lost in the air? They should stay in the final product’,” Hühn says.

Laux follows, “I asked Tilo, ‘why don’t we extract cocoa with a decanter, like we do for apple juice, wine, and olives?’ He looked at me and said, ‘Roland, I was thinking the exact same thing’.”

On the plane back to Switzerland, Laux and Hühn began work on how cold cocoa extraction would work. When patenting the technology, Laux decided to do the same for coffee, a relatively similar bean to cocoa. After Meier purchased the patent for cold cocoa extraction in 2014, Laux had no intention to stop exploring the possibilities of cold extraction.

“I’d dealt with cocoa for four years, and thought, ‘what should I do now? Coffee,’” Laux says. Mastercoldbrewer currently sells its cold brew coffee in Switzerland under the brand name Re- Coffee in the country’s largest retail chain, Migros. “We conducted multiple trials with different beans. Unlike chocolate, we do not use green beans because the taste is not as pleasant. Instead, we roast it gently at a lower temperature,” Laux says. “It was also important to find the right bean. We looked at a wide range of different origins and heritages. We decided on a Sidamo varietal, an Arabica single origin from Ethiopia because it’s very complex, fruity, and flowery. That was exactly the kind of beans we wanted to use.”

To raise capital for Re-Coffee, Laux appeared on the television series Höhle der Löwen, the Swiss version of American show Shark Tank. All five of its investors wanted to support Re-Coffee. Laux says the show made him realise cold brew is still new to many end users, and it will be a journey to promote the product.

“A selling point that works well with consumers is how one bottle of Re-Coffee provides a better ‘kick’ than energy drinks,” he says. “Our products contain the caffeine content of three espressos, which really wakes you up, but no sugar, so your attention curves better than with energy drinks. “This is especially valuable to students and night owls, who are in need of a lot of energy. So, at the moment, we are focusing on rolling out Re-Coffee at universities.”

After this, Mastercoldbrewer’s next step is to find the right partners to either help Re-Coffee or its Spin Cold Brew technology expand overseas. “We have a nice momentum because our cold brew is delicious and sugar-free. We can give consumers an energy drink that is healthy and can compete against the likes of Red Bull,” Schlittler says. “With Spin Cold Brew, Mastercoldbrewer has really created a whole new beverage.” GCR 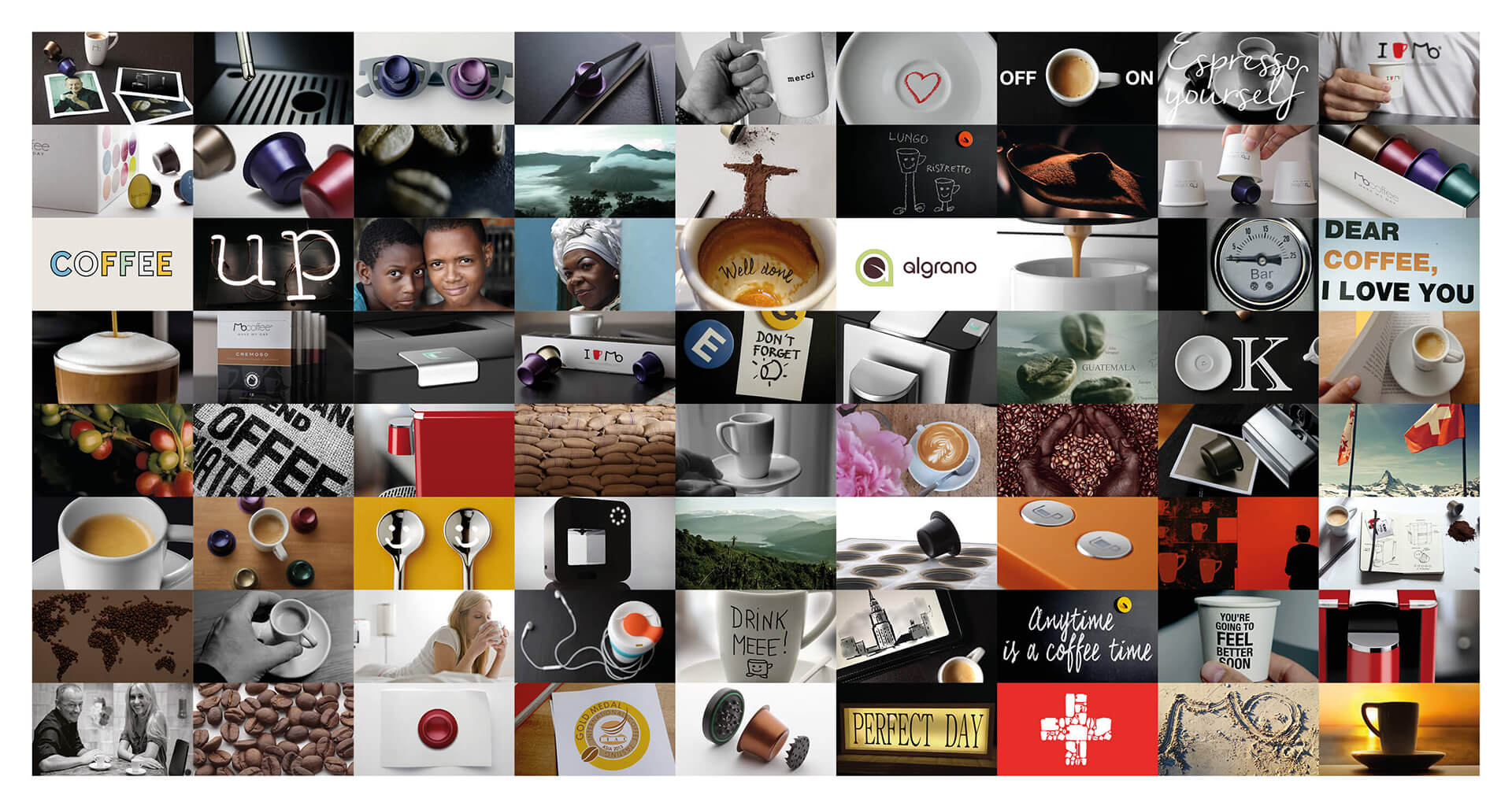 Cool! You have subsribed.